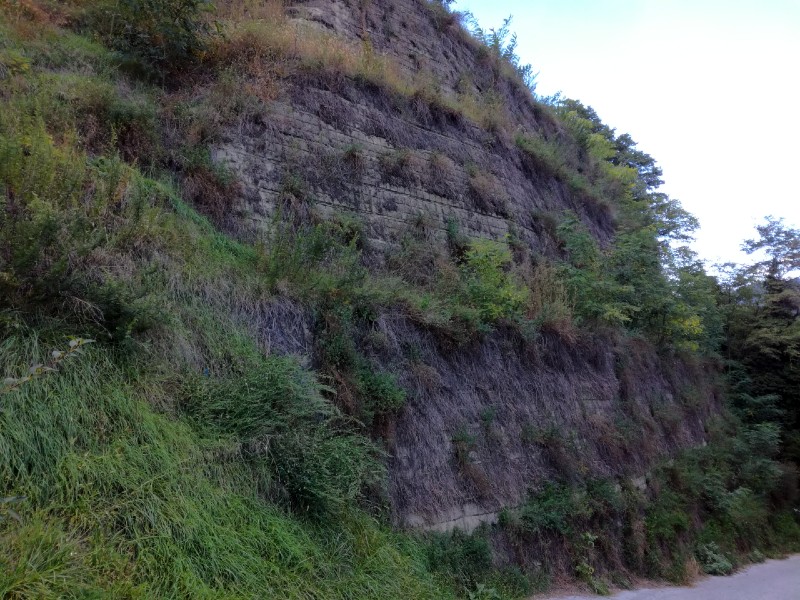 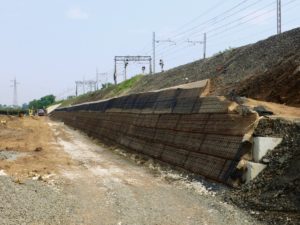 Reinforced soil is a natural engineering technique widely used in recent years. This method allows us to strongly limit environmental impact, by replacing traditional reinforced concrete walls with structures capable of greening the slope. In addition, the availability of filling soil on site allows to limit transport and processing costs. These structures may be used as:

What is the mechanical principle of these works?

The basic principle of reinforced soil is providing the ground with tensile strength, which will be null in absence of reinforcements. Thereby it will be possible to overcome the threshold of the friction angle as stable angle of the slope, increasing its value. Depending on the nature of the terrain and reinforcement type, it will be possible to reach slopes up to 65-70°, and considerable heights. Furthermore, a reinforced soil can be made with many different soil types; generally, soils predominantly granular and well graded are used in order to achieve adequate compaction. It is also important that soils are characterized by good friction and permeability values. 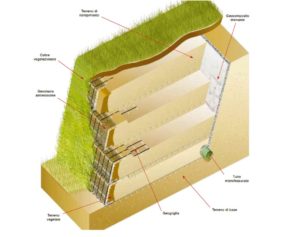 How do I install reinforced soil?

Reinforced soil is composed by:

In order to realize a reinforced soil, the first step consists in regularizing the laying surface and laying the upstream drainage system. Then, we proceed with laying the formwork, the geogrid with its binding, and the geomat. It continues with laying the filling material, usually 20-30 cm per layer. At each step, the soil layer must be compacted at the top, in order to obtain a surface as stable and horizontal as possible. Finally, a layer of organic soil is usually laid in the front of the slope, with the intention of allowing the growth of vegetation.